Coming from a country with a zero tolerance policy to street art and graffiti (beyond commissioned murals, which also often get painted over), I was excited to experience the street art scene in Colombia, having heard about it from other travellers.  I went on two free street art tours while in Colombia, one in Cartagena and one in Bogotá, both of which I highly recommend.

The origins of Colombia street art (as we know it today)

Like most urban centres, graffiti and street art existed in Bogotá long before now, despite being illegal.  The first inciting incident of the current street art scene was in 2011, a young street artist, Diego Felippe Becerra, aka “Tripido”, was killed by police while he was painting a wall.  This caused a huge uproar since the police had no grounds to shoot an unarmed 16 year old, and because he was killed simply for painting a wall.  The subsequent outrage gained political attention, and led to a move towards decriminalization of street art – that is, while it’s not legal, it is tolerated in certain areas and on some buildings.

The second inciting incident was in 2013, when my (unfortunately) fellow Canadian, Justin Bieber, went to paint a Canadian flag with a marijuana leaf instead of a maple leaf (so creative) on a wall not too far from where Tripido was killed.  The irony here was that Bieber was ESCORTED by police to do this, whereas the bulk of street artists in Colombia face abuse and extortion at the hands of police.  This led to a protest (which included painting over Bieber’s marijuana leaf) and further relaxation on the treatment of street artists in Colombia.

Of course, the very nature of street art is the riskier it is to do it, the better it is – so the increased tolerance towards street art in Colombia has led to artists continuously pushing the envelope of where and what they can paint.  Generally, street art is allowed on a building if the owner has given the artist permission (or even commissioned something), but the owner ultimately has a say on the type of content that would be on their wall.  So for more controversial pieces, street artists in Colombia have to walk the lines of illegality (which I’ve learned is more of an uneven zigzag in Colombia than a straight black and white division).

One of the more famous/recognizable portraits in La Candelaria

Bogotá is where all the drama began, so the street art scene is especially strong throughout the old La Candelaria neighbourhood and throughout the city.  The Bogotá Graffiti Tour was started by Crisp, an Australian street artist who moved to Bogotá in 2009.  We had Jeff, an anthropologist, as our guide, and he spoke of how Colombia’s current political climate and its diversity, both biologically and culturally, make for a strong street art scene.  The very purpose of street art is to put forward an expression of yourself into the public space – “Here I am – I matter, and this matters to me.” 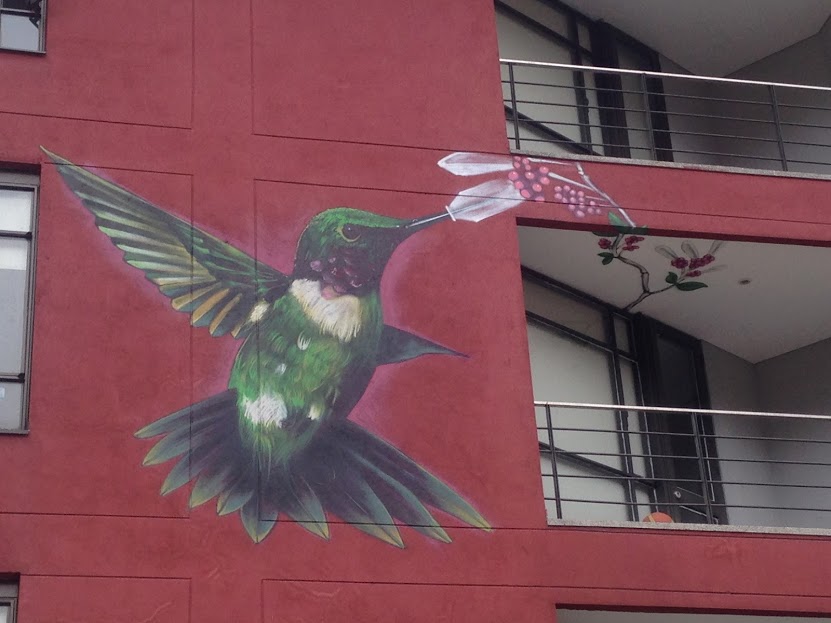 Street art doesn’t have to be political – sometimes it can just be pretty.

One street artist – DJ Lu – always paints real people.  He also prefers to paint in black and white so race does not matter.  To prove to us that DJ Lu focuses on real people, our guide introduced us to Carlos, an avocado vendor in the downtown area who was painted by DJ Lu.  Carlos now willfully poses with his visage for the tour attendees, and accepts monetary tips for doing so – I’d suspect he makes more money doing this than selling avocados.  The other common image that DJ Lu paints is insects with guns for arms and legs.  His rational for this is that insects spread like a disease, much like war.

Carlos gives us the thumbs up.

A lot of street art is reactionary to the thousands of people displaced by the ongoing civil war and war on drugs, especially how both of these affect indigenous people.  The below piece is about how illegal coca farms are fumugated and destroyed by government forces to halt the cocaine trade, or how they are removed for the sake of progress – but this destroys good farms and people’s livelihoods as well.

The caption reads “Somos Memoria” – “We are memory.”  Colombians cannot forget their painful pasts and memory needs to be alive, because those who forget the past are doomed to repeat it.

The more political street art of Bogotá is just outside La Candelaria.  The below piece is part of a giant mural (including Carlos’s face) done by a collective of Bogota street artists, mainly protesting some political figures (like former president Uribe, who is very vocal about being against the peace process right now) and industries like mining, as well as how corporations and the 1% prey on the backs of the poor. 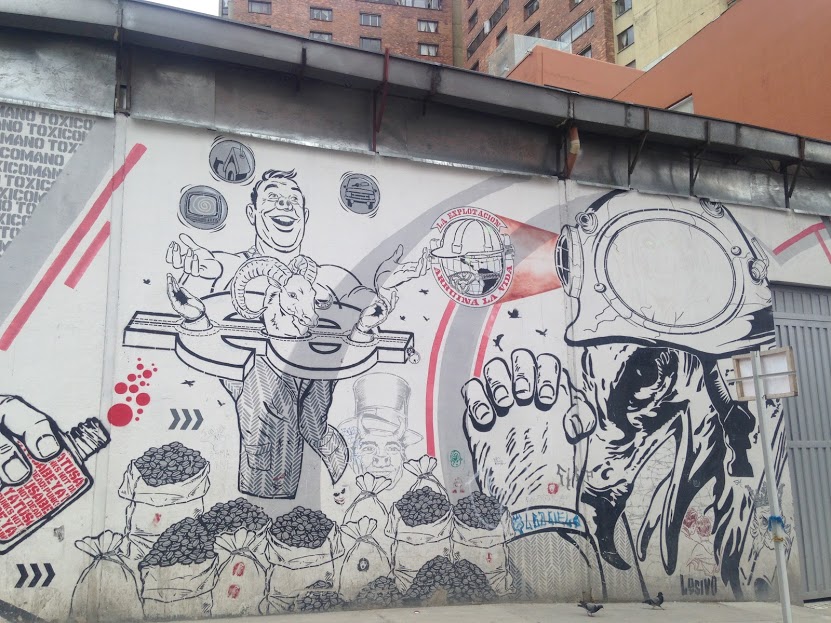 So much being depicted in just one small section of this street art collective mural.

A lot of the street art in the Getsemani neighbourhood is about anti-gentrification.

Though not as big as Bogotá, Medellin, or Cali, there is a very strong street art scene in Cartagena, particularly in the gritty Getsemani neighbourhood.  Getsemani used to be a no-go zone for travellers, but has now become a hub of diverse restaurants, clubs, and backpacker hangouts.

This piece on the wall of a vacant property protests gentrification – and ironically, the building is for sale, at a price out of reach for most locals. Further irony – having street art on a building leads to a higher property value.

The influx of mass tourism in Colombia has not been without its side effects.  Particularly in Cartagena and the Getsemani, foreign buyers of property and the need/want to develop more tourism infrastructure has driven property values up beyond local reach.  Gentrification and the reduction of cultural diversity in a neighbourhood in favour of “progress” is a huge problem all over the world, and so many Cartagena street artists have taken to the walls to express their opinions on the subject.

Garbage and pollution leads to severe damage in our oceans.

Mass tourism, especially on Colombia’s Caribbean coast, has also had negative environmental impacts, which is also a theme found in Cartagena street art.  The influx of tourists to the Playa del Blanca, once a site where sea tortoises would lay their eggs, has led to only one egg being found during hatching season last year as opposed to hundreds from just years prior.  There’s also increased garbage in the ocean, which is protested against in the piece above.

An indigenous woman closes her eyes as Spanish ships approach.

As in Bogotá, a lot of street art reflects the treatment of indigenous people, but particularly about how they were treated by the Spanish conquerors.

The Future of Street Art

New street art pops up every day in Colombia.  This past week, I was in Bogotá for the five year anniversary of Tripido’s death.  The Bogotá Graffiti Tour donated spray paint and several street artists took to a bridge in the north of the city to pay further tribute to him.  As street artists gain recognition, many of them start selling their artwork in galleries.

A message to us on the Bogotá Graffiti Tour.

I suspect, with the current political situation in Colombia around the peace talks and upcoming referendum vote, much of the street art will reflect that.  But, I guess you will just have to go and see for yourself!