I don’t care much for clickbait, but the one headline that never fails to make me click is “The Most Beautiful Bookstores in the World,” or something along that line.  I would curse having only visited one that showed up frequently on this list, being Shakespeare & Co. in Paris.  One such bookstore that got mentioned multiple times on similar lists is Ler Devagar, located in Lisbon, Portugal.  And so, when we booked our stay in Lisbon, I put it at the top of my list.

After a morning and afternoon in Sintra, I needed a break from the hoards of tourists so we figured it was an ample time to seek this bookshop out.  Finding Ler Devagar was a challenge – it’s not located in a major touristy area and we took multiple buses to arrive a ten minutes walk from our destination.  I was glued to Google Maps on my phone, following the blue dot as it led me through rundown streets with hidden names.

The perpetual question I have as a traveller: am I allowed to go inside?

To type in Ler Devagar in Google Maps actually defaults the search to “LxFactory”, so once we found ourselves at our destination, this is what lay before us.

As it turns out, Ler Devagar is within the LxFactory compound, which we learned later was an 1800s sewing factory, turned (much later) into a conglomerate of design shops, marketing and communications business, indie shops, quirky restaurants and art houses.  Though, again, as we wandered through this quiet compound wondering if we were allowed to be there, the actual entrance to Ler Devagar was the least bit imposing or attention-seeking.

And, once inside, it was unlike any place I’d ever been to before.

It was only when we looked in the window and saw there were books that we figured out we were in the right place.

In Portuguese, Ler Devagar means to read slowly.  The bookshop, Ler Devagar, was dedicated to the simple pleasures of life – reading slowly, living creatively, thinking magically.  The main level of the store contains books on shelves stacked from floor to ceiling, and in multiple languages – English, Portuguese, Spanish, German, and many more.  I almost bought the Portuguese edition of The Catcher in the Rye – called “O Apanhador No Campo De Centeio.”

There are two levels above, constructed in a metal catwalk fashion – there is a cafe/bar, as well as scattered childhood paraphernalia that seeks to remind us of the importance of holding on to those early sprinkles of imagination.  There are also tables throughout – for workspace, reading nooks, or quiet conversation. 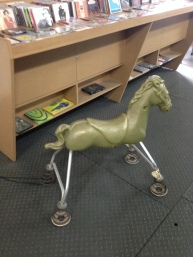 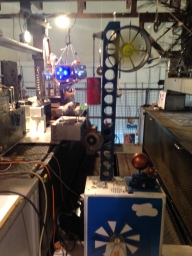 Much of the third level is machines – but not in the serious sense.  The store refers to them as “pieces of dreams” and “mechanical insects.” These are the machines you dream of building as a curious child, but with no financial promise in such a hobby, you never get to build them past the days of the school-aged science fair.  Unless, of course, you’re this guy.

This is the genius inventor behind these machines, which serve no practical purpose other than inspiring fascination and imagination.  Fluent in four languages, this old man explained to us (in French, as we joined in with a couple of French people who had approached him first) how his machines work.  It appeared to me that his job was to build these random contraptions, and explain to the curious, with unequalled passion, how each of them work and what they do.  After he finished explaining a few machines, he apologized and said he had to leave his ‘guided tour’ of sorts: “I’m sorry, I have to go and fix one of my machines, the elastic band broke.”  He was living the dream of every inventive child, in one of the most magical settings I could imagine living such a dream.

We let our fingers trace book spines and watched the “pieces of dreams” move in their various ways for just over an hour.  It was only at that point that we realized we were both starving, and should seek out some actual sustenance in addition to the nourishing of our childhood curiosity.

The streetcars and hills of Libson are filled with great character, and the old castles and monasteries certainly make for great sights, but if you go nowhere else in Lisbon – you will not regret a trip to Ler Devagar, which, if I were to make a clickbait list of amazing bookstores, would probably top my list.

Below are two more videos of what it’s like inside Ler Devagar with the “pieces of dreams” and “mechanical insects.”

Sharing our experiences about travel and food