The final day.  I’d bought my tickets for The War on Drugs/Flaming Lips closing show a few weeks before arriving in Iceland because of two reasons: 1) I am paranoid, and 2) I did not want to wake up early like my fellow Airwaves compatriots on the Friday morning to stand in line at Harpa for four hours to show my wristband in exchange for 1 of 2200 tickets.  The $80 was worth the extra three hours of stress-less sleep.

I was over-tired, hungover, and it was my last full day in Iceland so I shouldn’t be spending it nursing said hangover, right?  Fortunately, Iceland is one of those places that just lets me be.  I was quite happy to spend most of the day leading up to the closing show doing nothing but walk up and down Laugavegur once, and stopping into Eymundsson for a coffee and quick show.  The evening’s performance, as it would turn out, would be well-worth a day of nothing.

Once my headache had subsided enough for me to even consider leaving indoors, my relative that I was staying with, Aslaug, drove me downtown so I could wander around and enjoy my last afternoon in Reykjavik.  I checked my Airwaves app and saw that Futuregrapher, who someone had told me about once, was playing in the Eymundsson bookstore , so I stopped in and grabbed a seat and a salted caramel mocha from Te og Kaffi.   Turns out Futuregrapher’s odd Icelandic “poetry” over weird rhythms and noises were a bit much for my hungover brain, so I left to stroll the streets of Laugavegur one last time before I’d meet my Icelandic family for a delicious Icelandic dinner of lamb and potatoes prior to the closing show at Vodafone Stadium.  Aslaug’s husband, Runar, gave me a shot of some Danish 42% alcohol to help with my headache before the show.

I’m terrible with goodbyes, which followed after dinner, and so saying goodbye to my relatives before my cousin drove me to Vodafone Stadium left me feeling sad and woeful.  But, as soon as I was dropped off at Vodafone and saw that my keener friends were not only first in line to get in BUT were also INSIDE (yes!!). my spirits were instantly lifted and I was jazzed for the show again. 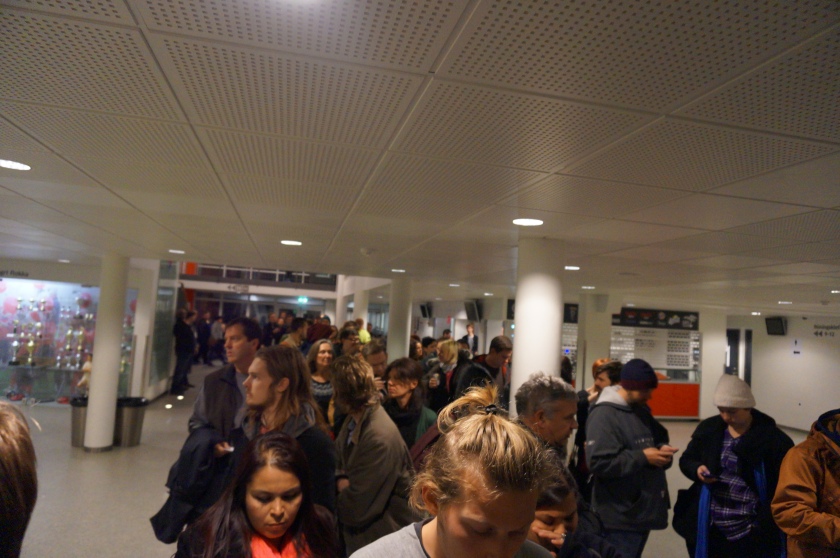 At the very front of the line inside Vodafone Stadium.

When they finally let us in after The War on Drugs’ delayed sound check, my friends and I ran towards the rail and claimed our spot, and once again, I couldn’t believe my luck.  Provided my weak womanly bladder and inability to fight back against crowds did not falter, I was going to be in the front row for the Flaming.  Fucking.  Lips.  A band that I had loved and devoured since I first heard “Do You Realize??” on the soundtrack of the dreadful Mandy Moore movie, How To Deal, circa 2003.

I’ve also loved The War on Drugs since before Kurt Vile left them to go solo.  My room mate had seen The War on Drugs in San Francisco a couple of weeks before I left for Airwaves, and wasn’t impressed because she thought there were too many guitar solos.  And The War on Drugs’ latest album,  Lost in the Dream, does have a lot of long guitar solos, which would only be potentially stretched out in a live performance.  But I eat that shit up like a goddamned baby bird.  Give me a great guitarist playing an amazingly long and amazingly beautiful guitar solo and you get a happy Arielle.

Right in front for The War on Drugs, with no one but the press in the way of my view.

I was not disappointed in their opening performance.  Though I admit they’re an odd opener for The Flaming Lips – The War on Drugs is very Springsteen, if Springsteen started making music in the 2000s, Americana, denim jackets and jeans, whereas The Flaming Lips is confetti, inflated puppets, and all the facets of Wayne Coyne’s bizarre personality.  When The Flaming Lips were in Edmonton in 2010 (which I somehow missed completely because I was out-to-lunch on all current events during my undergrad), Ariel Pink’s Haunted Graffiti opened, which seems a more appropriate warm-up gig.

The shy but talented Adam Granduciel.

Lead vocalist and guitarist Adam Granduciel is a shy performer, but still commands the stage on the basis of his talent alone.  I had an obvious benefit of being right in front, and being able to watch him look down as his fingers majestically strummed his guitar was completely mesmerizing, so perhaps I wouldn’t feel the same about the performance had I been further back.  But he didn’t play Baby Missiles, the hit from their last album Slave Ambient, and which I embarrassingly know all the words to, so that was a slight disappointment.  But, it was hard to succumb to disappointment when I was in the front row surrounded by this wall of amazing guitar sounds – may I ask again how Icelandic sound engineers manage to perfect sound in every single Airwaves venue, even in a weird handball stadium??

The crowd shortly after The War on Drugs left, in the weird handball stadium.

When The War on Drugs left the stage, my friends and I were left wondering about the strange paraphernalia on stage for the Flaming Lips show.  What were the weird spaghetti strings hanging from the rafters?  Why, when The Flaming Lips were a festival headliner many times this year, were things held together by duct tape?  Did they not have money?  Was that a confetti canon?  Oh my god, is that Wayne Coyne wearing a green fleece dino hoodie helping his roadies set up, and are his pants made out of duct tape too? 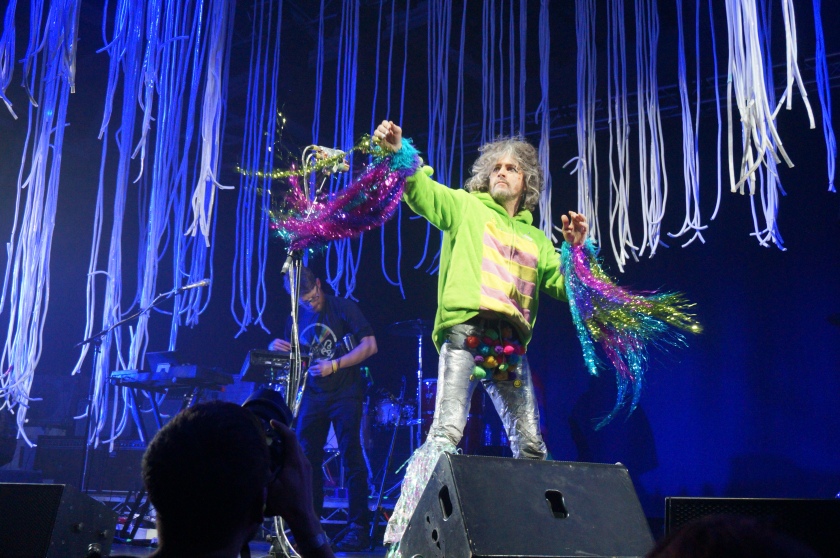 Ladies and gentlemen, the marvellous Wayne Coyne throwing a balloon into the audience.

They opened with The Abandoned Hospital Ship, which is probably my favourite song by them from one of their nineties-era albums.  Two people were dressed in giant inflated caterpillar/butterfly costumes as well as one dressed as a sun with a happy face ; all three bobbed around stage while confetti shot from the cannons and poured down from the ceiling.  We were absolutely covered in confetti and I must have had the biggest shit-eating grin on my face because some guy in the press pit had his camera in my face at several points during the song (thank goodness press pits were only open for the first 15 minutes or so).

“And now that it’s conceived, the station has all settled down, and I’m sort of relieved, and I’m getting over it now…”

After the whirling melodies of “The Abandoned Hospital Ship,” they moved into “Yoshimi Battles the Pink Robots Pt. 1” with inflated aliens and a star on stage.  At the line “She’s got a black belt in karate,” Wayne Coyne and the aliens both made an aggressive karate chop before stopping the song completely.  “Okay you guys,” Wayne said, “The extent you guys all karate chop is the absolute indicator of the excitement of this show, if this alien can do it so can you.”  So he restarted the song, and we all joined in with the karate chopping.  Later, Wayne would thank us for being “such happy fucking freaks tonight.”

“Oh Yoshimi, they don’t believe me – but you won’t let those robots defeat me:

As predicted, Wayne Coyne got into his hamster ball/inflated bubble and crowd surfed in his bubble about halfway through the show, which was insane.  They also had a giant “Fuck Yeah Iceland” balloon that they tossed into the crowd near the beginning that was being bounced above everyone’s heads in addition to a plethora of balloons (and Wayne Coyne’s bubble).  I wonder if the Icelandic handball stadium security guards knew what they were getting into that night – largely their responsibility to throw the balloons back into the crowd when they ended up in the empty press pit, and to help lift Wayne Coyne’s hamster ball into and out of the crowd.

During “Look…The Sun is Rising” off of The Flaming Lips’ recent album, The Terror, the security guards covered at least the first third of the crowd with this giant smooth tin foil-like sheet (I’m not sure how far back it went, because I was in the front and under the sheet.  The sheet extended from Wayne Coyne’s shoulders like a sprawling cape (he was no longer wearing his dinosaur hoodie and had changed into a glam-like suit).  The smoke machines were on full blast as were the strobe lights, and the security guards had to shake the cape over top of us.  It was incredibly trippy, and I was thankful I wasn’t on any hallucinogens because that would have made it an incredibly terrifying experience (as it stands, my lungs, which sometimes suck at being lungs, were not a fan of the excessive smoke machines).  Close to the song’s end, people started trying to claw and poke their way through the top of the sheet, and at the concert’s end, people were taking home bits of the cape as a souvenir. 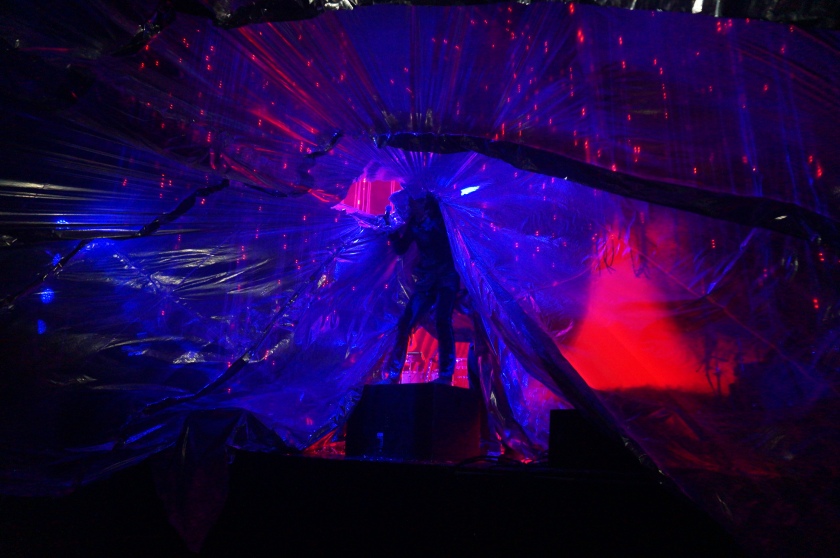 Wayne Coyne and us inside his enormous cape.

The entire show was a magical, visual treat that well-deserved its title as a concert you must see before you die.  The encore consisted of a slower-paced version “Do You Realize??”, followed by their cover of “Lucy in the Sky with Diamonds,” in which we were covered in confetti once again.  How apt to basically close  my Airwaves experience with “Do You Realize??” – I would not see my Icelandic friends and relatives for at least another year (if I return to Airwaves next year and life doesn’t get in the way).  The time you have with people is so precious, and this is something that’s often lost on the people you see all of the time at home.

Lucy in the sky with diamonds and confetti.

Afterwards, there was confetti in my hair, in my purse, down my dress, stuck to my shoe laces, in my beer cans.  Once the crowd was clearing out, people were lying on the ground making angels in the confetti piles, tearing off bits of what remained of the tinfoil, playing tug of war with the balloons and the letters that remained of “Fuck Yeah Iceland.”  And I couldn’t stop smiling – “happy little freaks,” indeed. 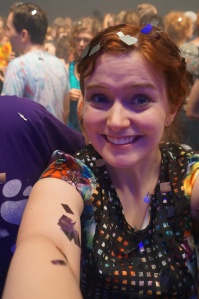 The next day, on my flight home going west, we flew through the sunsets of Greenland and the Atlantic ocean and briefly through night, and down into Canada where the world was waking up.  And I remembered The Flaming Lips again: “You realize the sun doesn’t go down, it’s just an illusion caused by the world spinning round.” 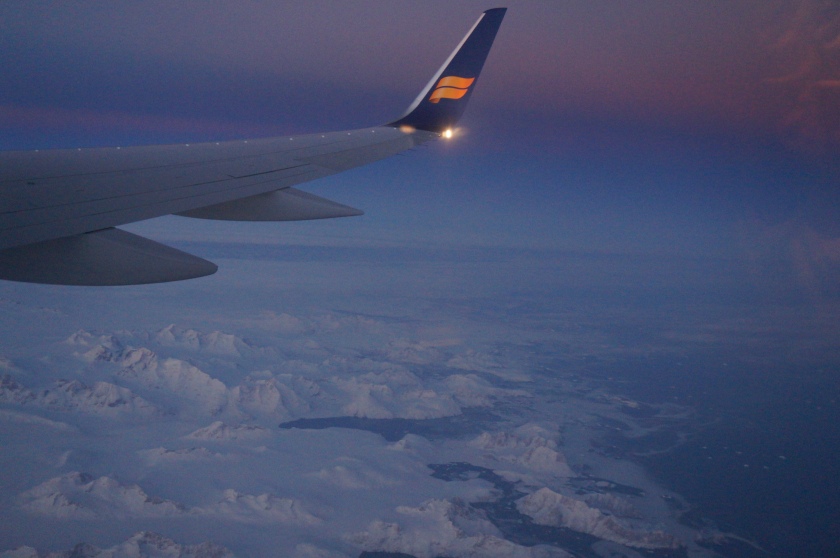 Click below to find out about the other days I spent at Iceland Airwaves 2014: